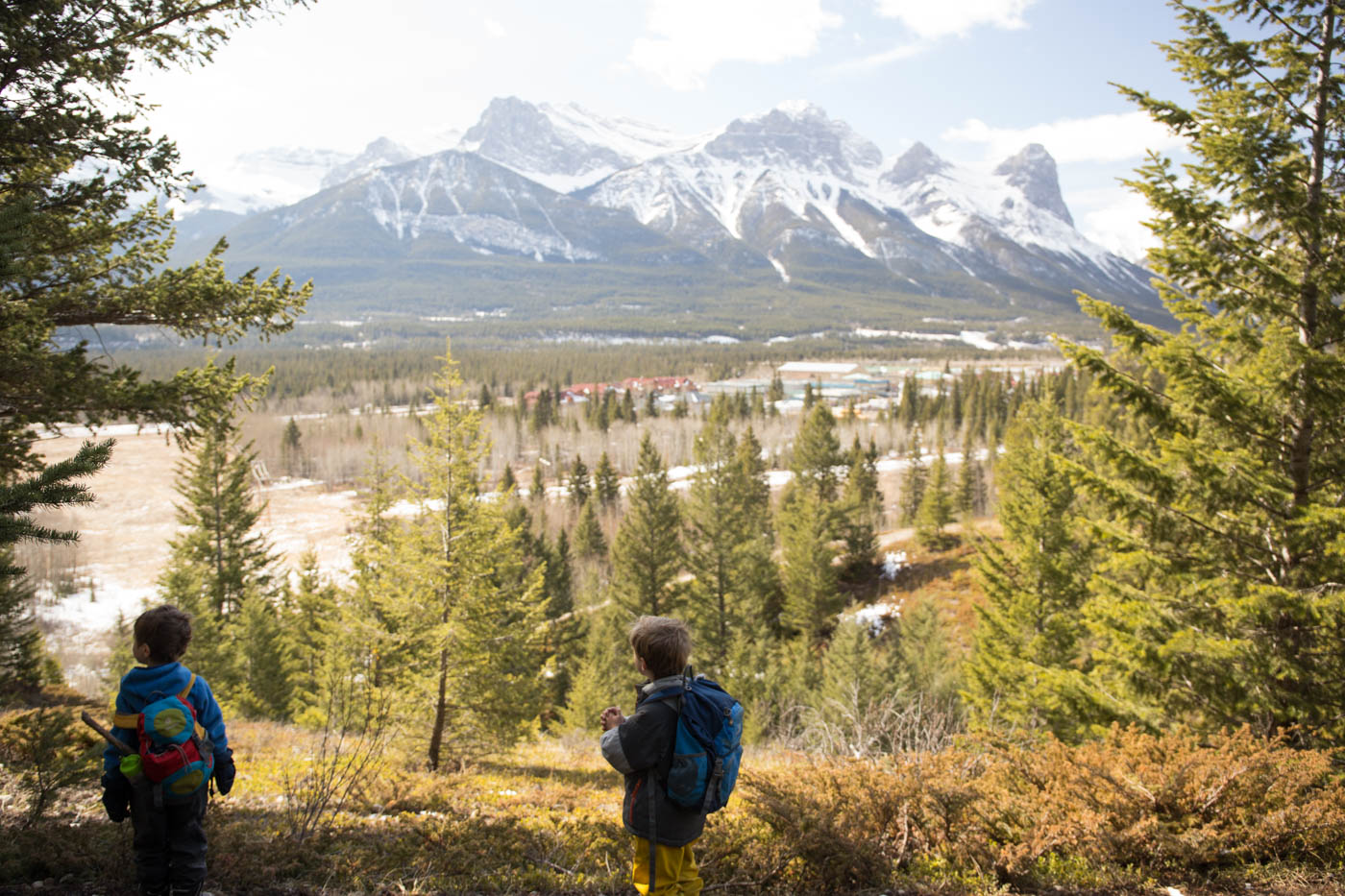 Today Simon and I visited an outdoor forest play program in Canmore, Canada and were blessed with incredibly blue skies, mild spring weather and breathtaking surroundings.

We arrived at the Canmore Alpine Club, the meeting spot, where we wandered down a slippery snow covered path to the ‘tipi’ where we were told the children would shortly be arriving to. 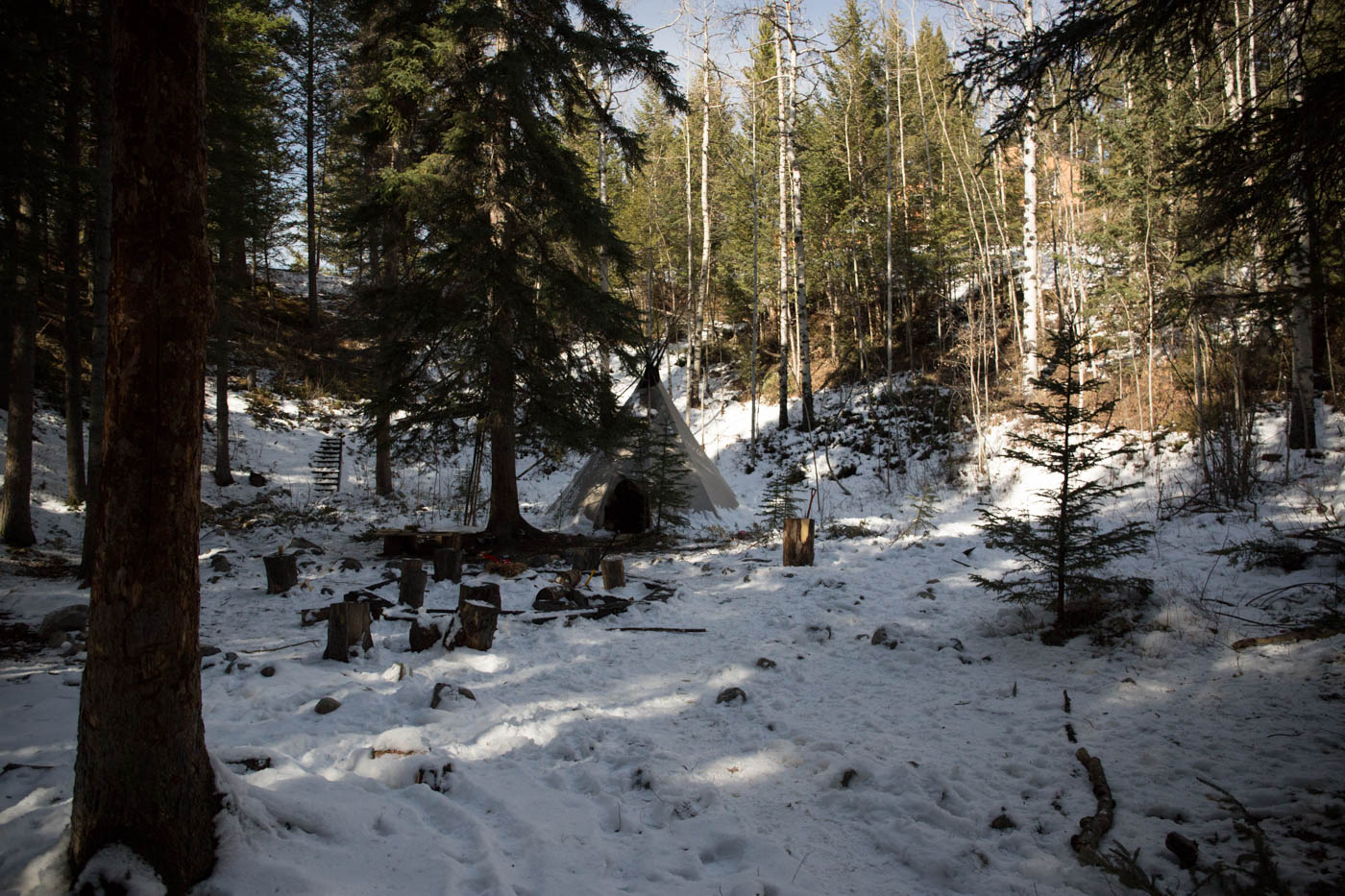 We then heard the sound of excitement and laughter as the children ran down the snowy path past the campsite and into the tipi. We were welcomed by Dave and Corey, the instructors of this program, both parents of young children and passionate outdoor enthusiasts. The day at forest play begins at lunch time, where the children finish at their Waldorf Kindergarten or school and come to the forest for the afternoon. 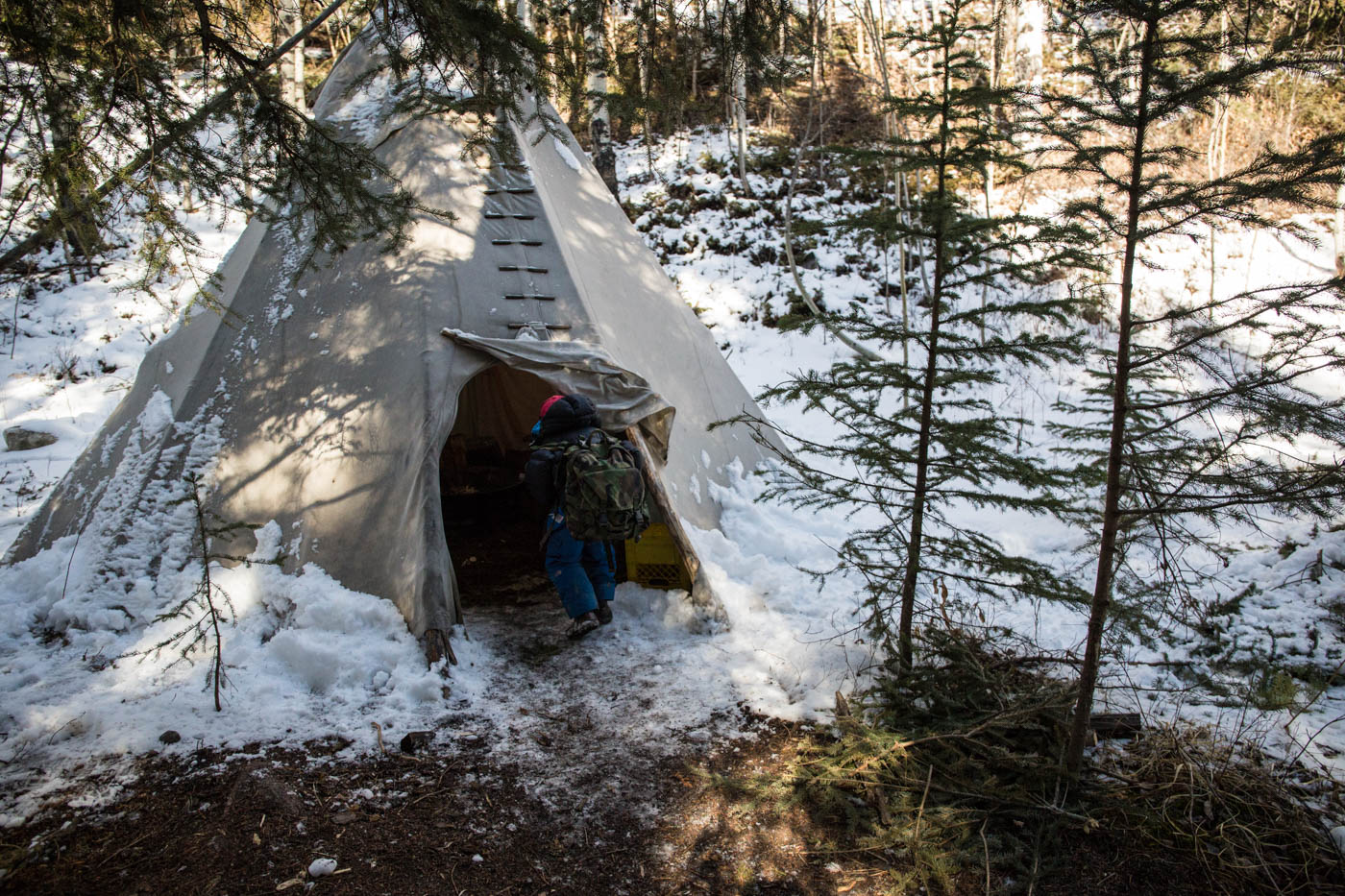 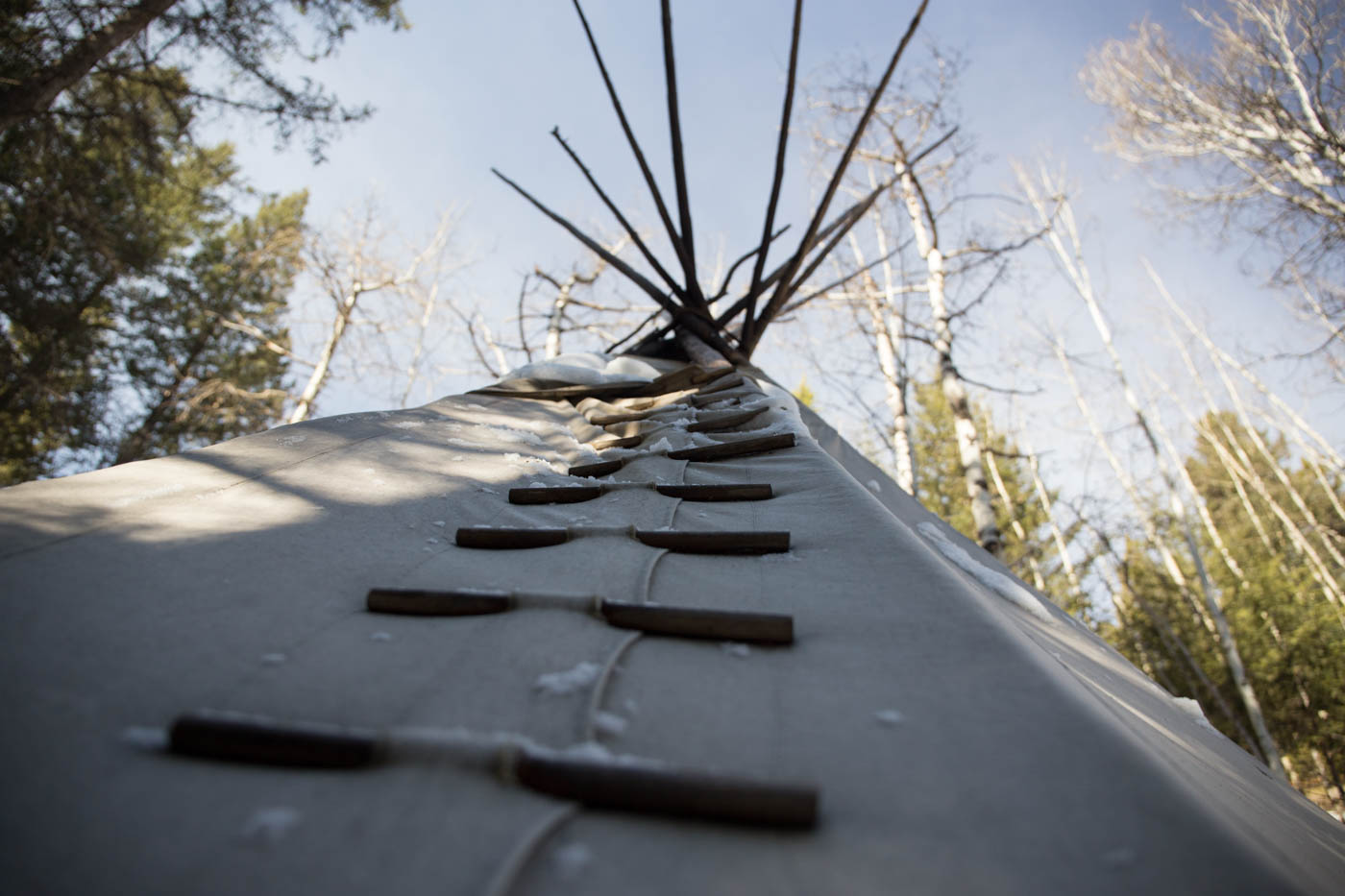 The children eagerly tucked into their lunches, shared stories of their day, while Dave and Corey spoke to the group about lighting the fires. There were a few keen helpers who started collecting wood and a bag full of lint from a dryer to use to start the fire. The children had complete control of this process and were seen testing the sticks for kindling against their cheek to see if they were wet or dry. After arranging the fire inside the tipi Dave asked for an assistant to light the fire, demonstrating and reminding them of the safest way to strike, hold and light the match. It was amazing to see how skilled and capable this group of 4-6 year olds were in understanding fire making and the reasons it may or may not be lighting, discussing blowing on it and that maybe it needed more lint as a starter. 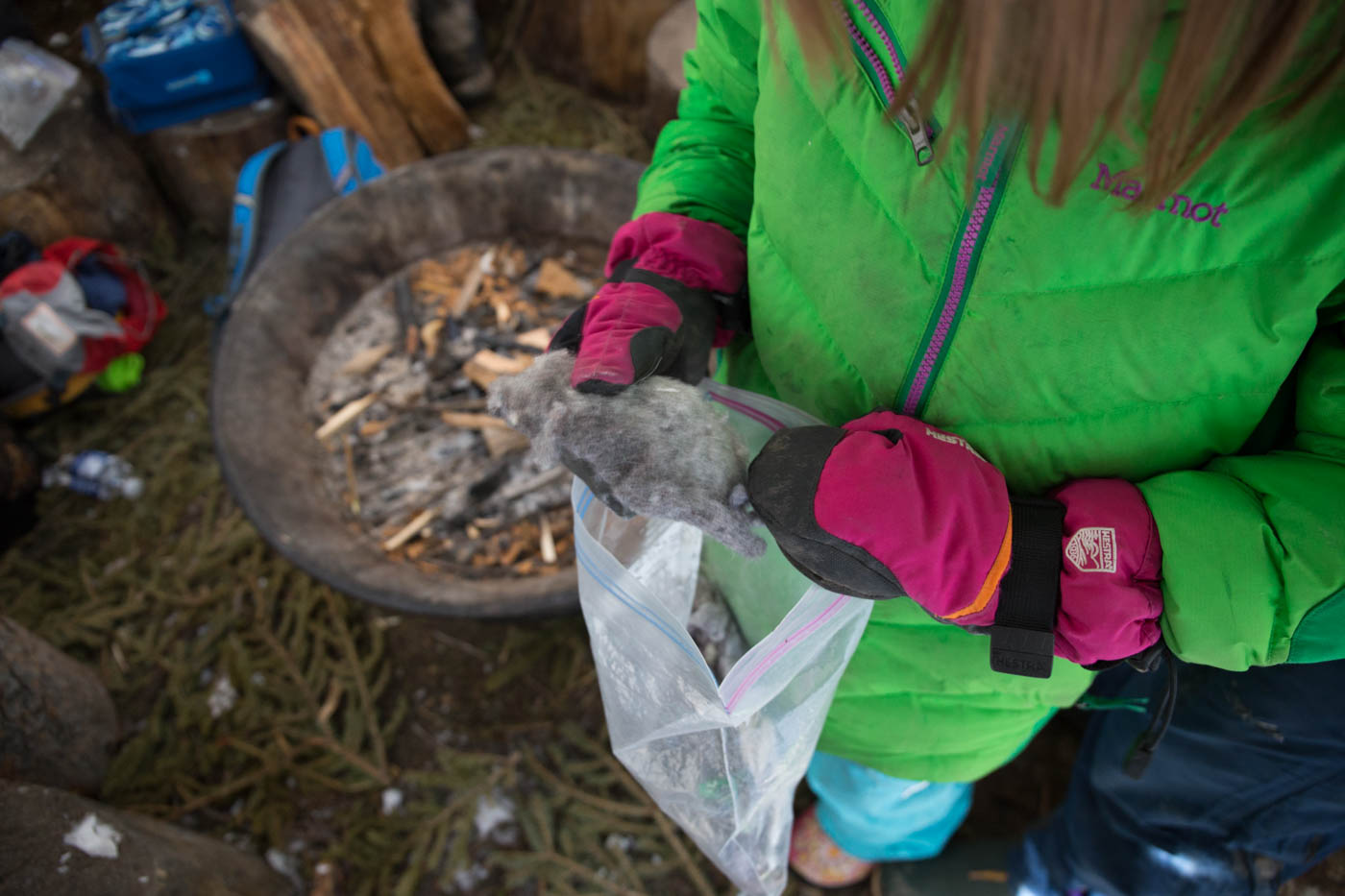 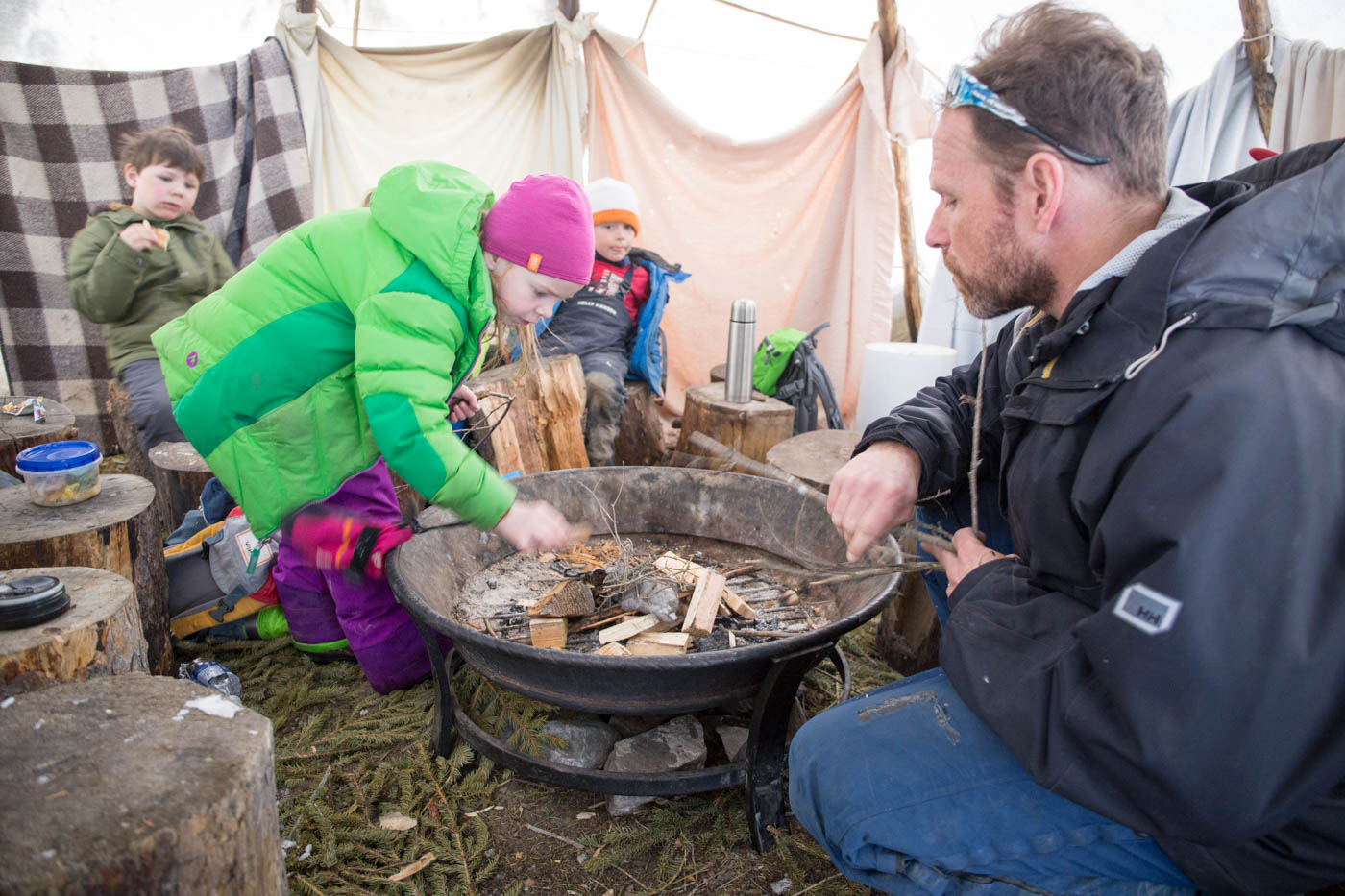 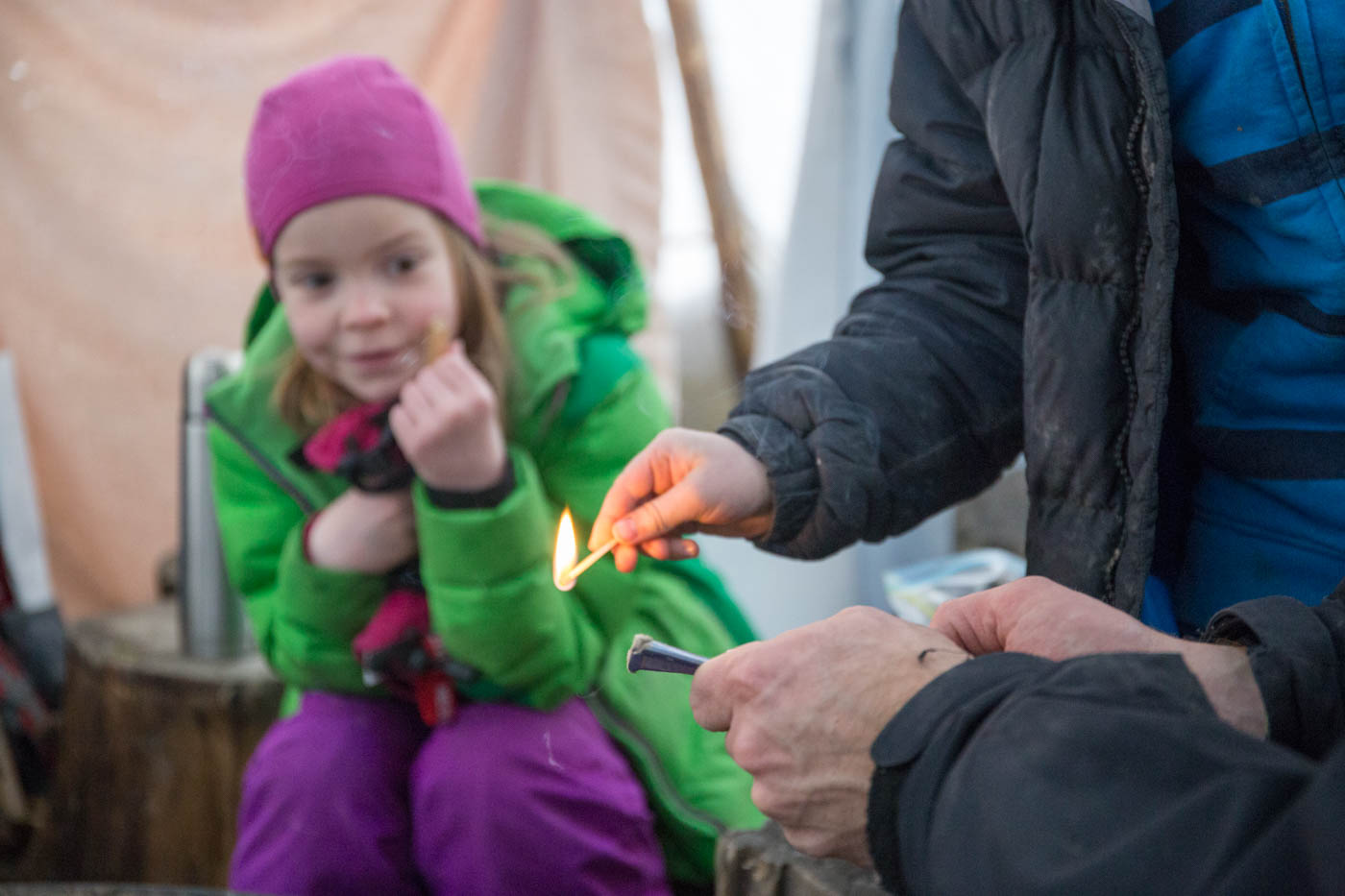 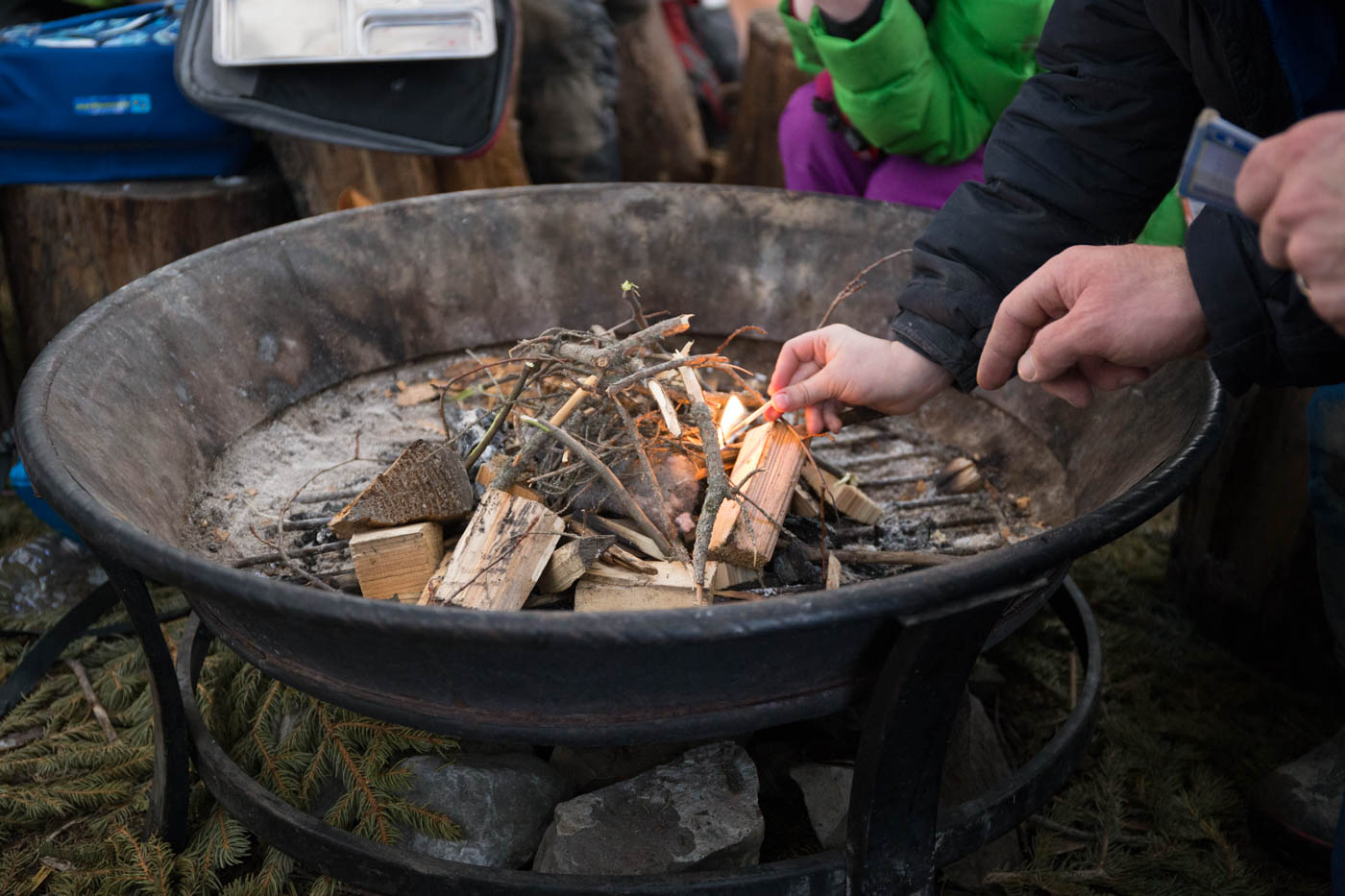 I wandered outside to see how that fire was coming along, witnessing a child cutting wood with a hatchet and another using a long pine branch to stoke the fire. All of which happens under trusted supervision and confidence in the children’s capabilities and awareness of the risks and safety involved in lighting fires. At this stage it was clear to me already how authentic and special this program really is for the children. 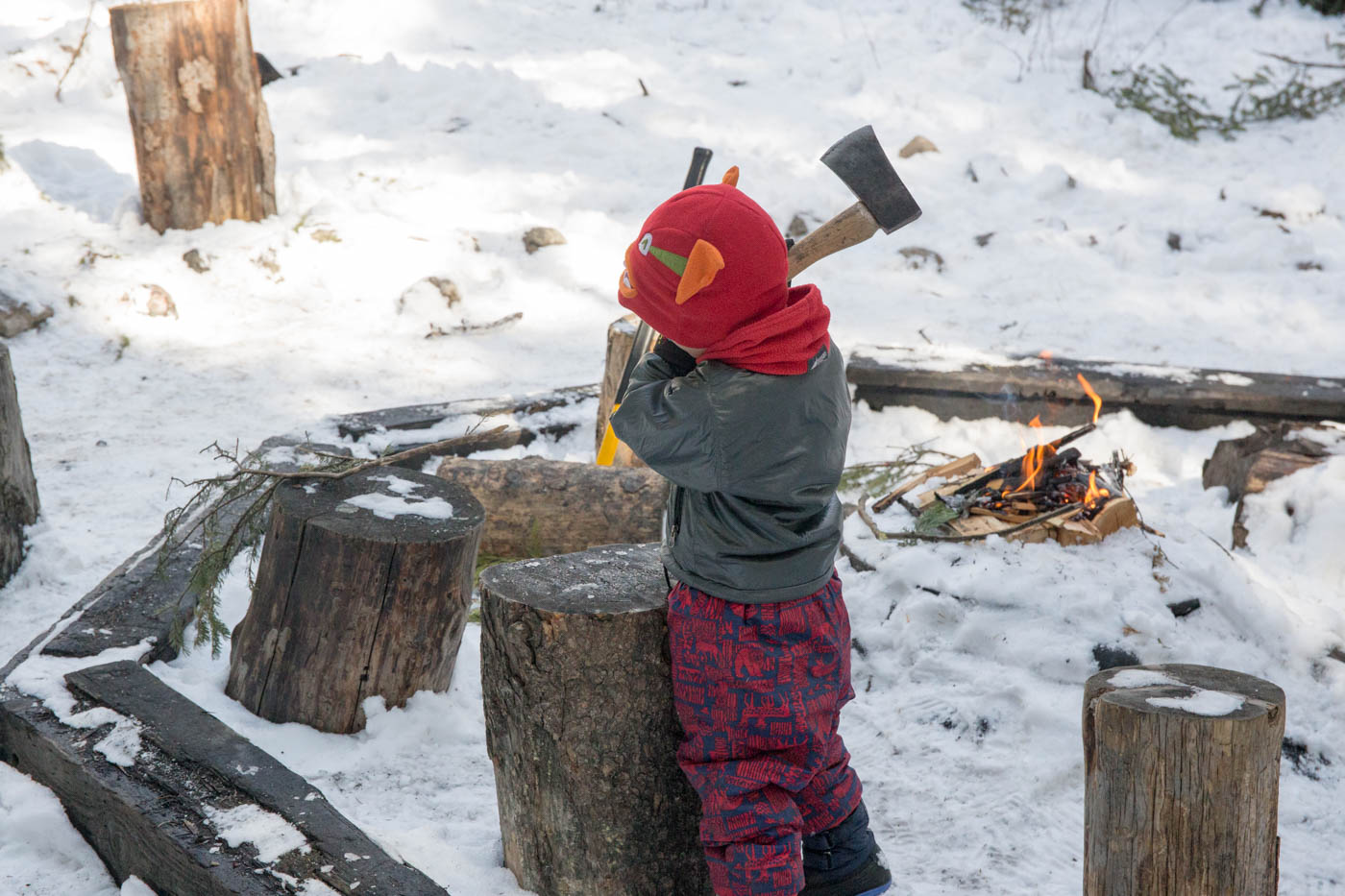 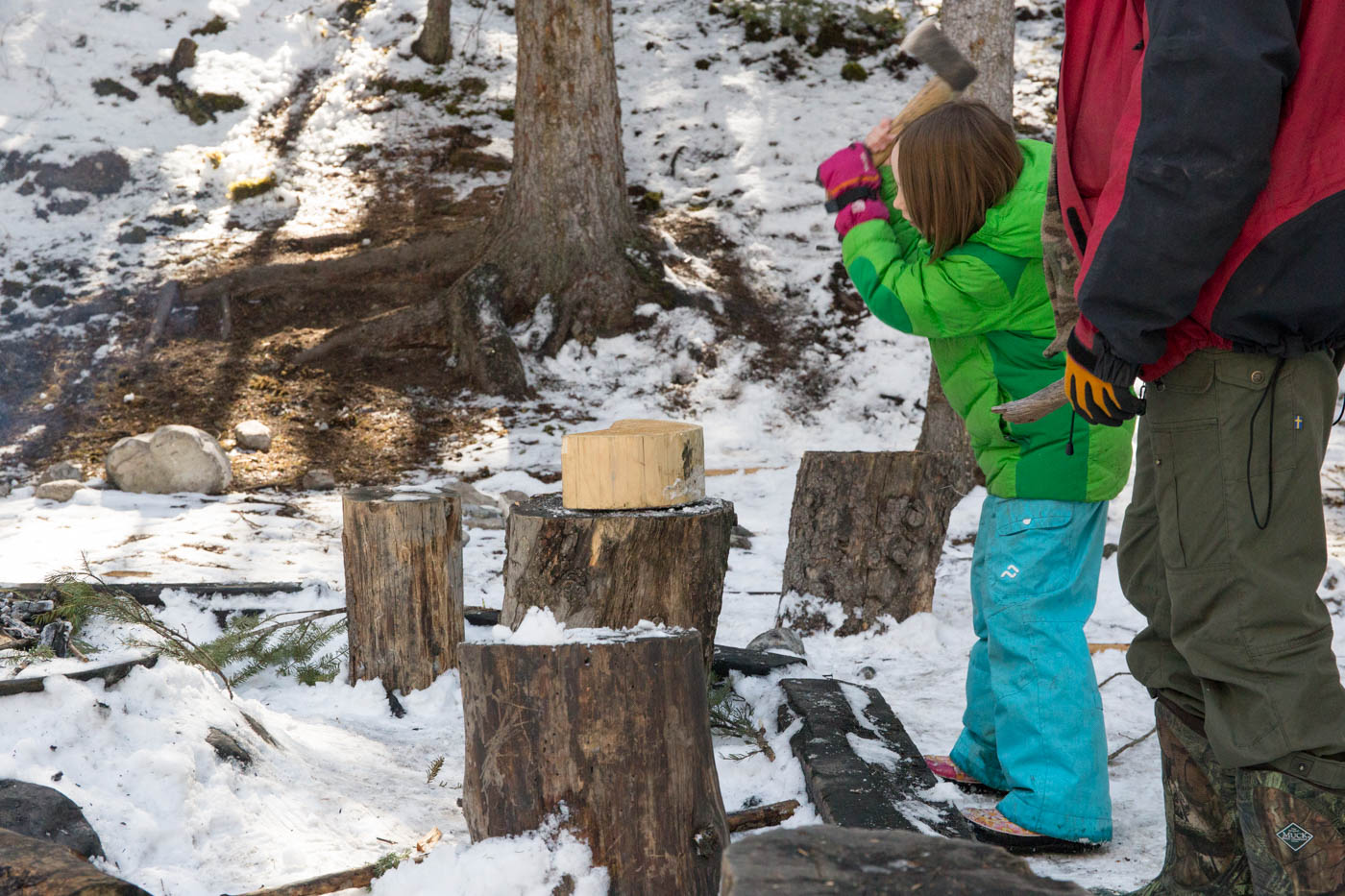 With a small group of children warming up inside the tipi Dave begins to tell a story, involving the children in the flow of his storytelling. Corey is outside being chased by a T-Rex who was asleep in its den. This unrestricted and open play continued for sometime with snowball fights, slides and hide and seek all unfolding. 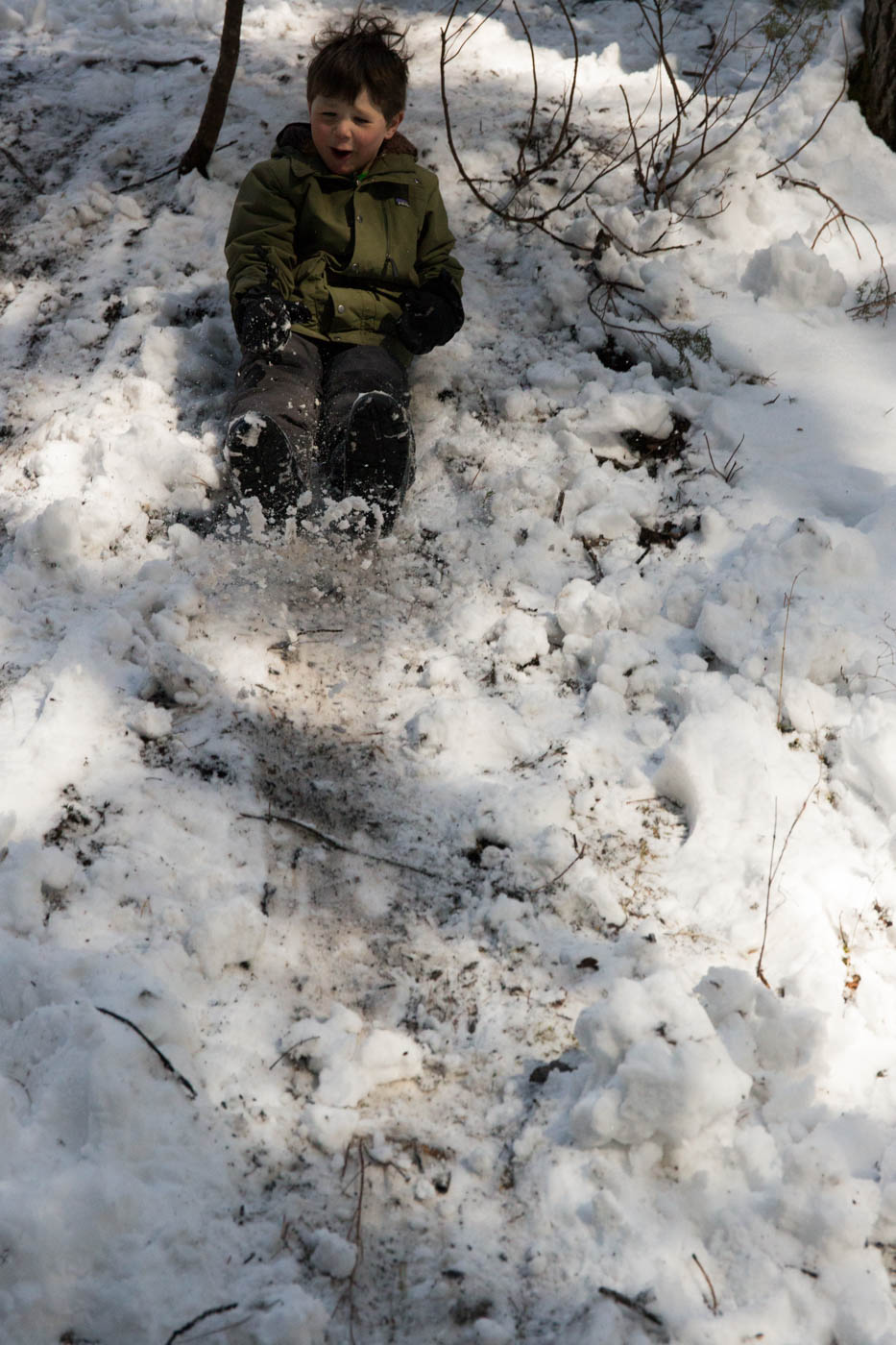 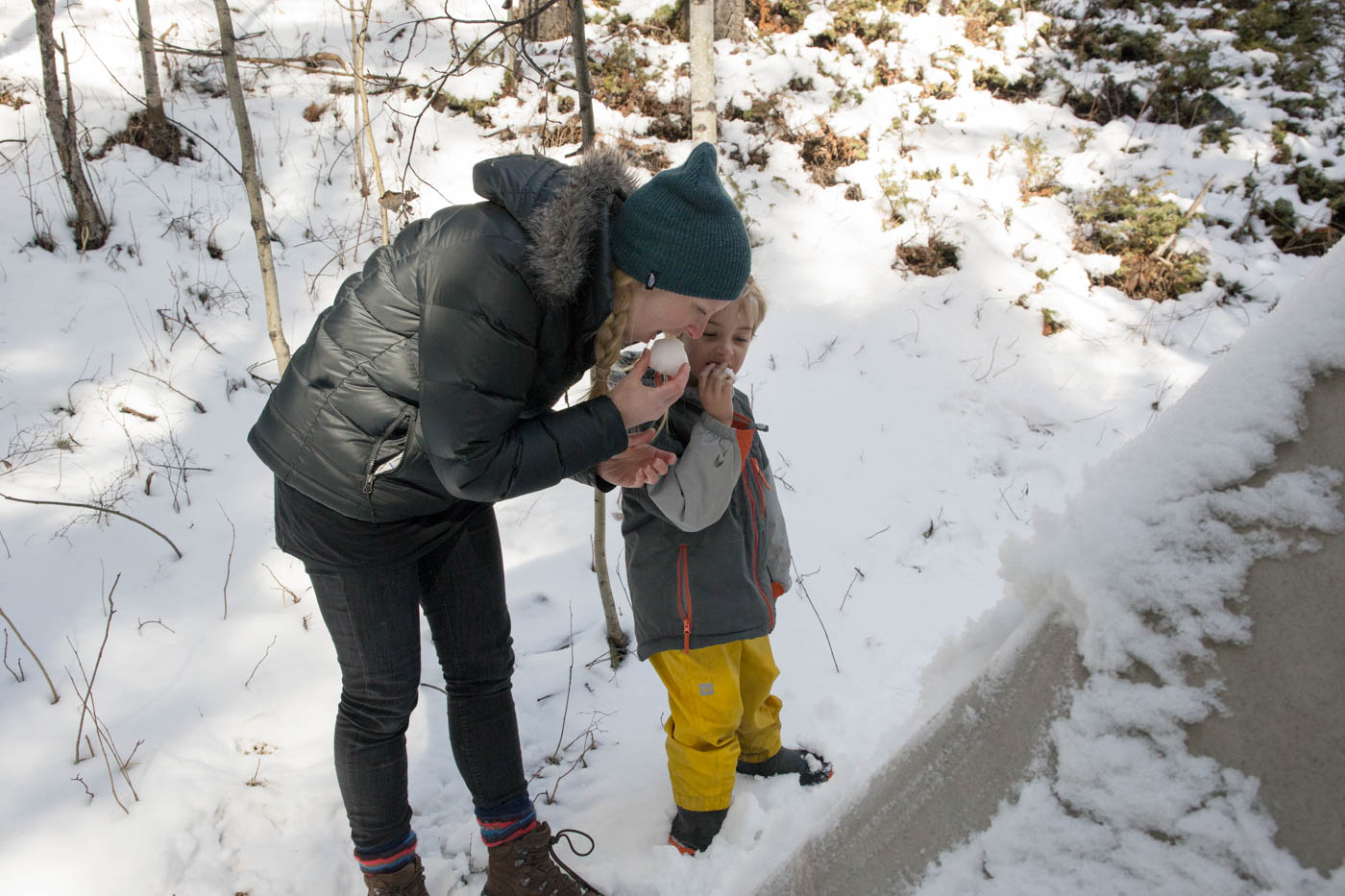 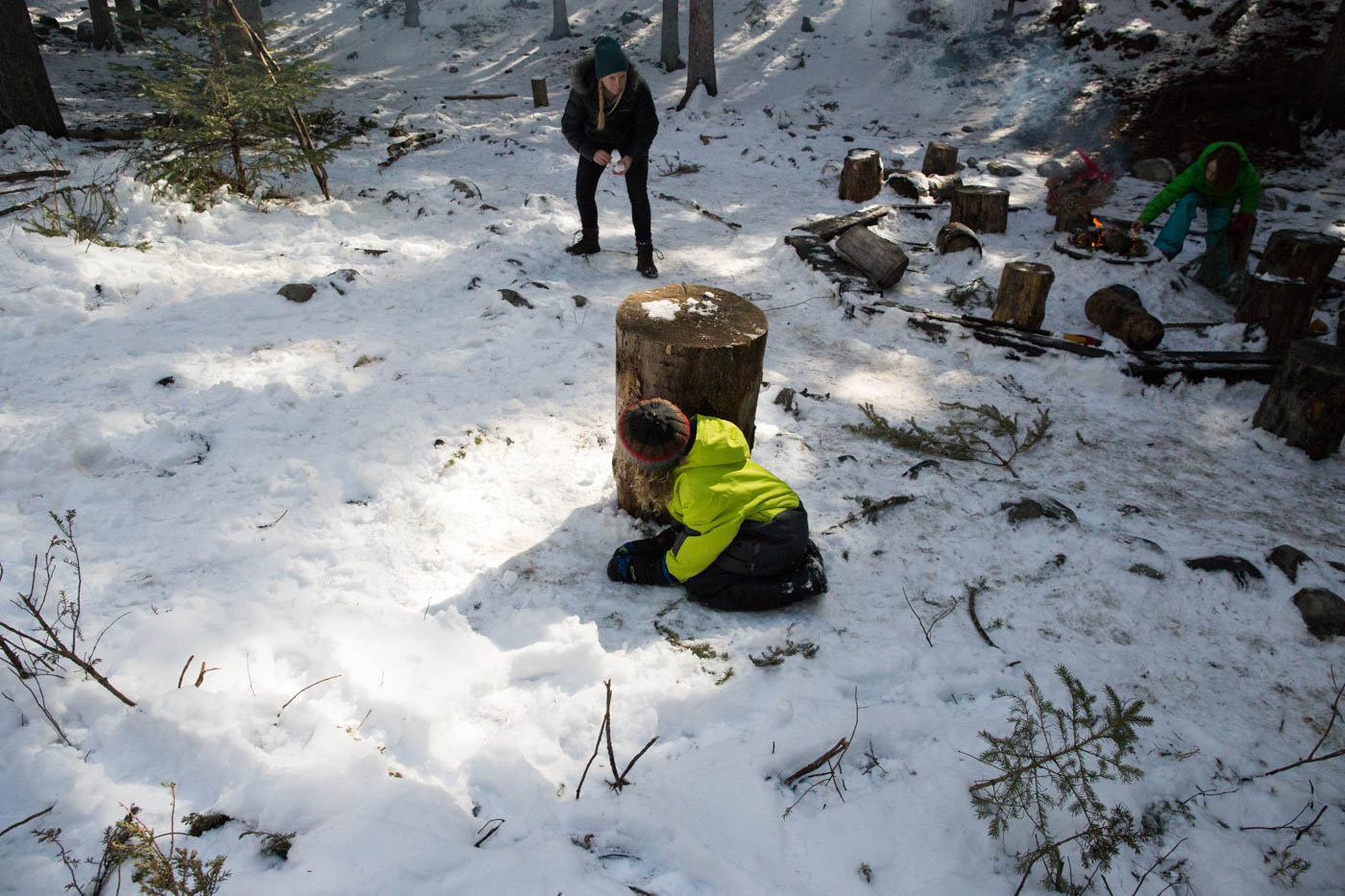 Once the fires were roaring, play had slowed a little and bellies full, it was then time to officially begin the day. We were treated with an enchanting welcome song where the children used sticks and hands to create sounds of an African drum.

Dave asked what the children felt like doing for the remainder of the session and a majority of excited children all requested carving camp. A leader was selected, in charge of leading the way and making sure everyone was together and safe. Bags were placed on backs, jackets collected and we headed off to craving camp, a short walk along a hillside track to a sunny and open space surrounded by picturesque Rocky Mountain views. 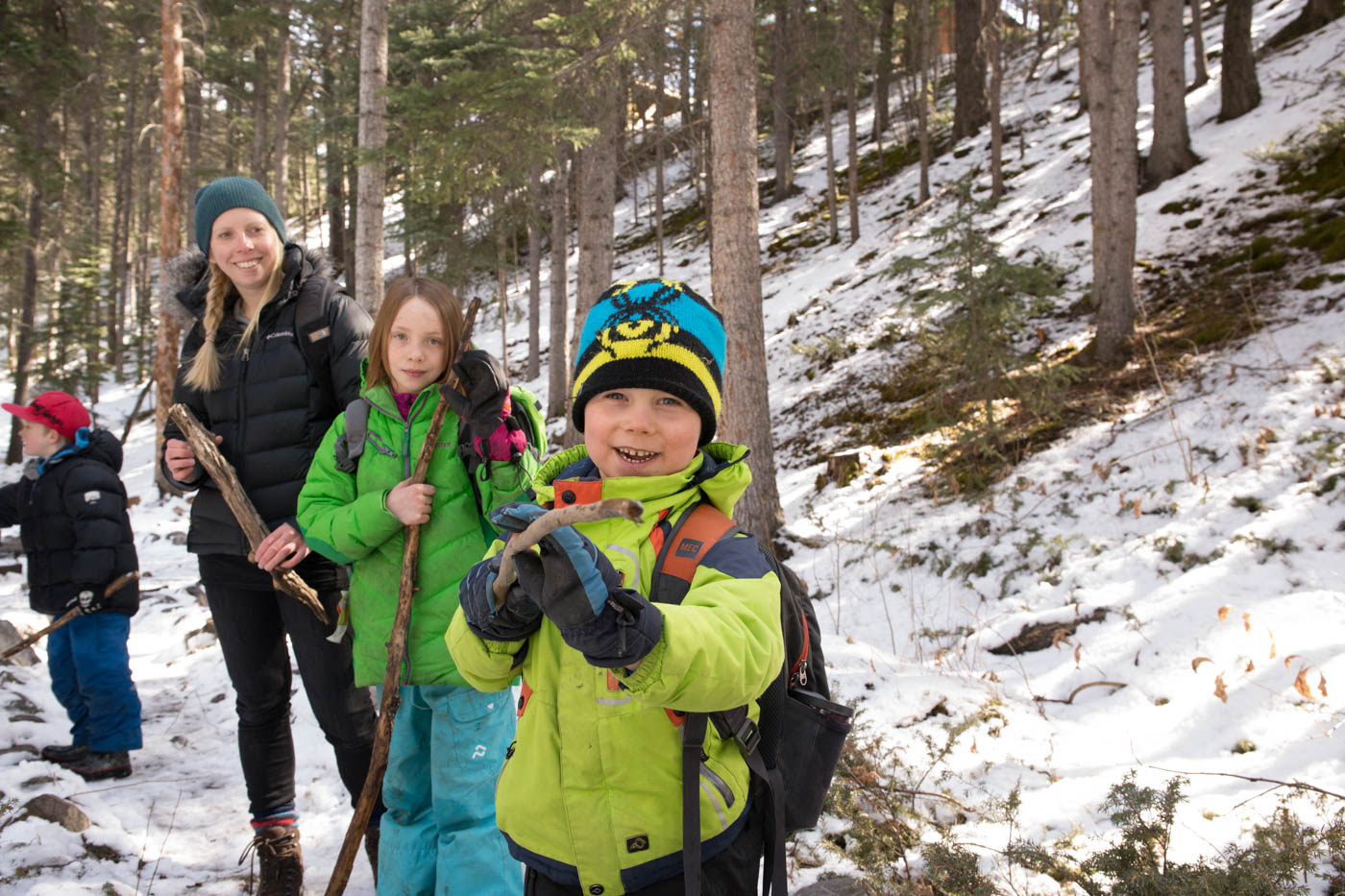 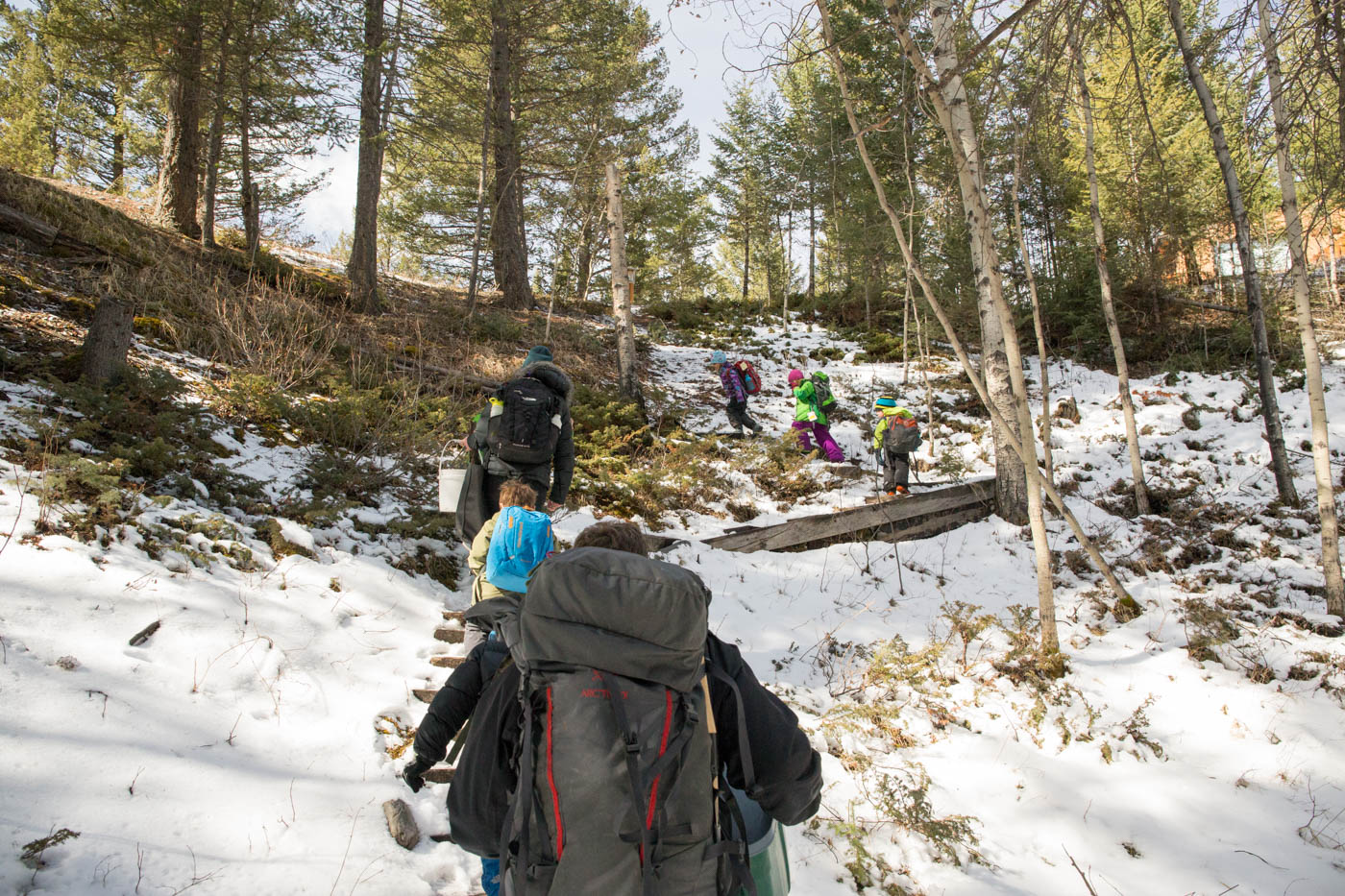 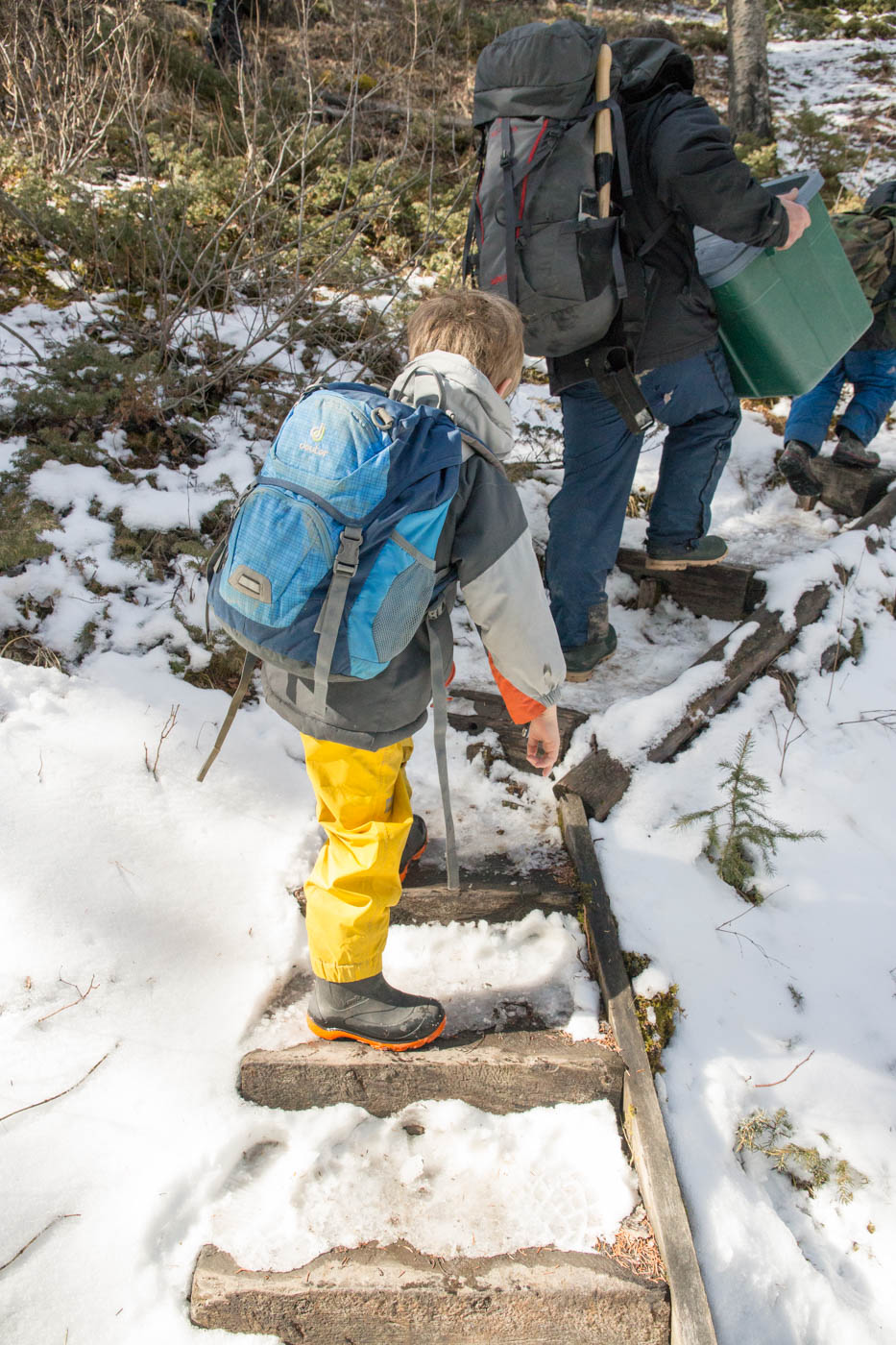 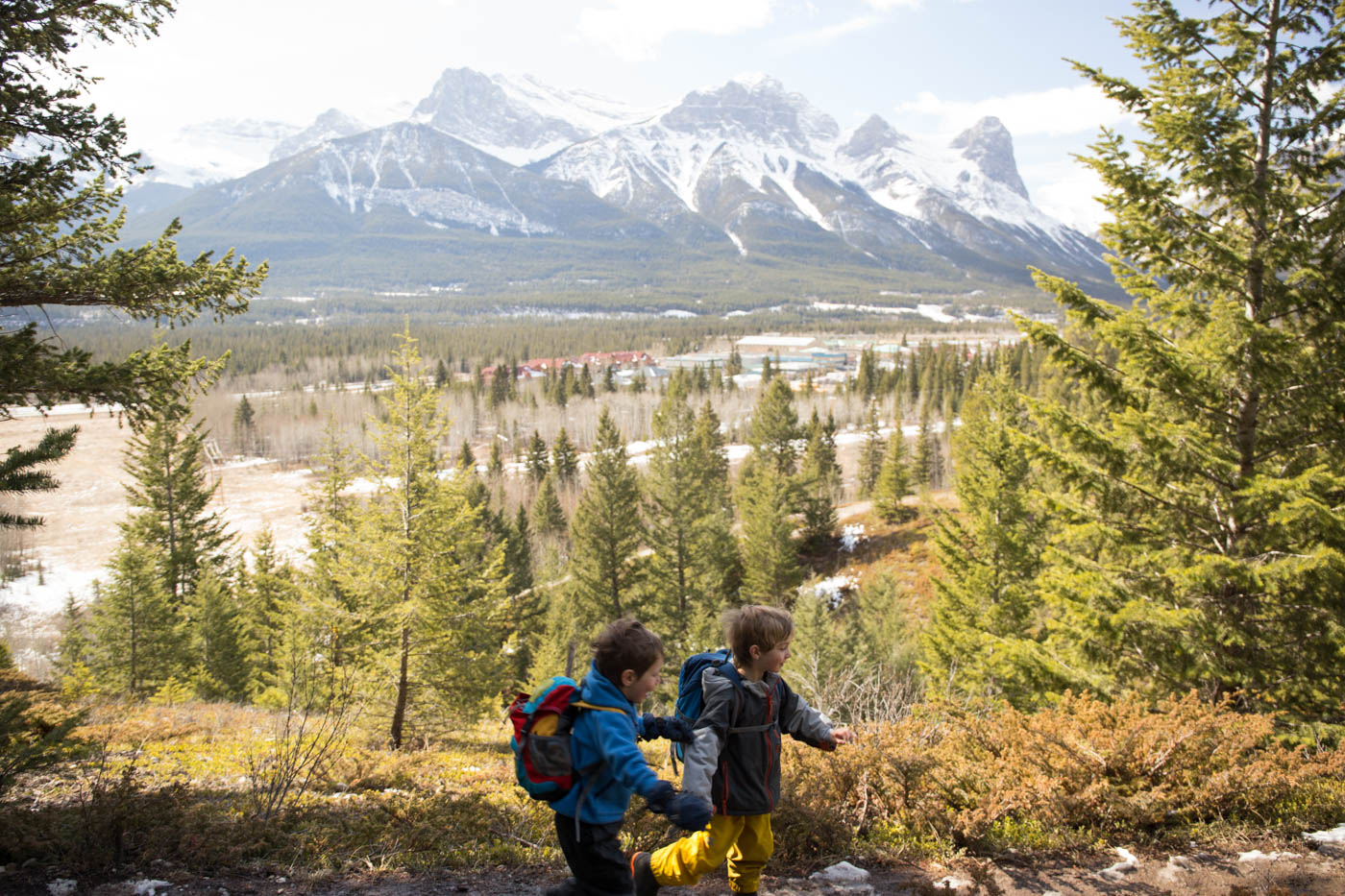 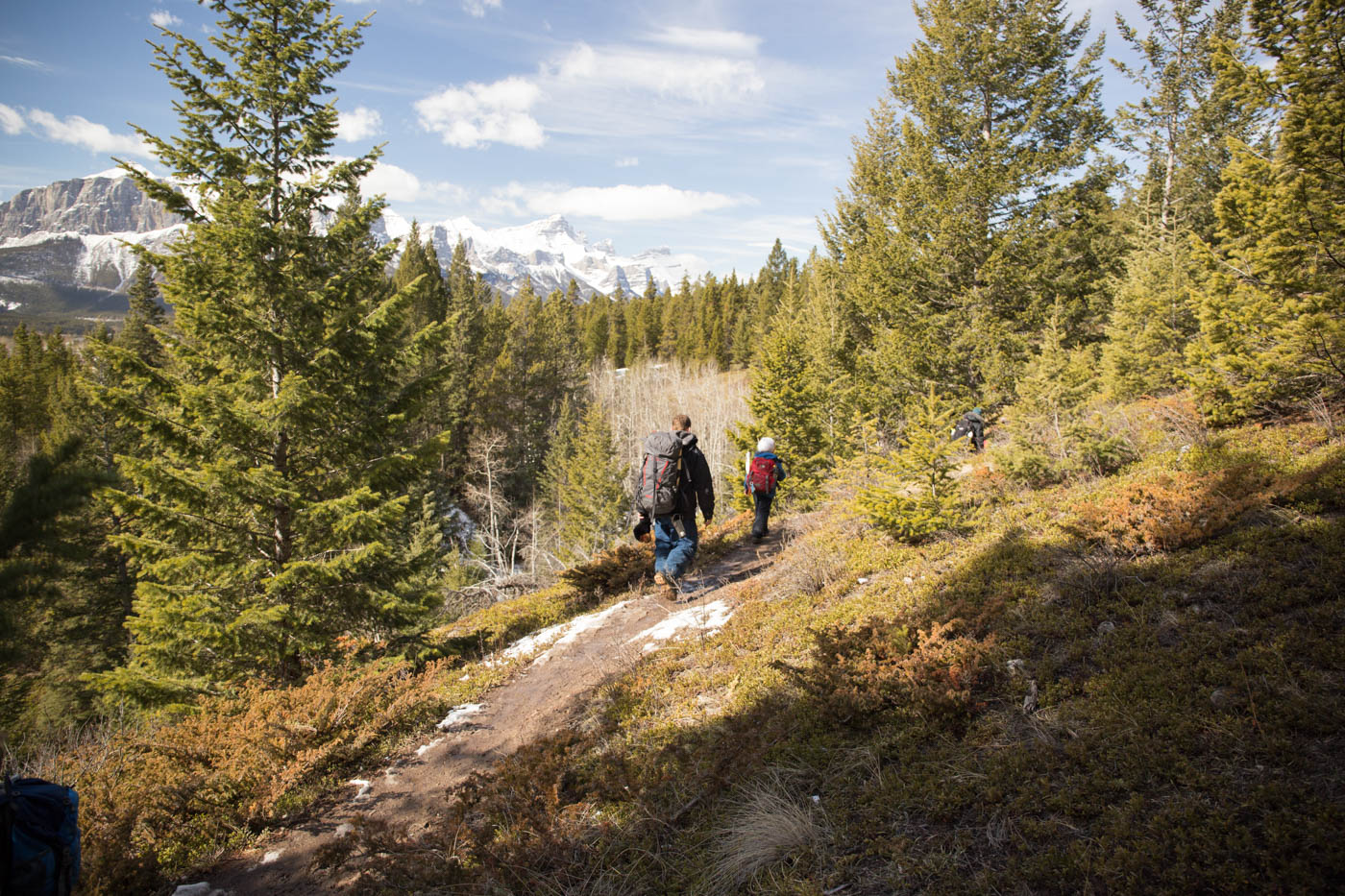 It was incredible to see how quickly each child settled into an area and activity they wished to do, from carving, to climbing, to hiding, some still eating. I observed the children sit, pull out their wood and knife or peeler and contently work on their carvings. I overheard a child telling another “be careful, your in my blood bubble” with an explanation from another telling me that it is the area around you where you might get hurt from a stick or a sharp knife. Boats were being created by the children with a lot of experience carving, with long sticks being sharpened by the younger ones who are using peelers to begin practising the foundation skills of carving in a safer manner. 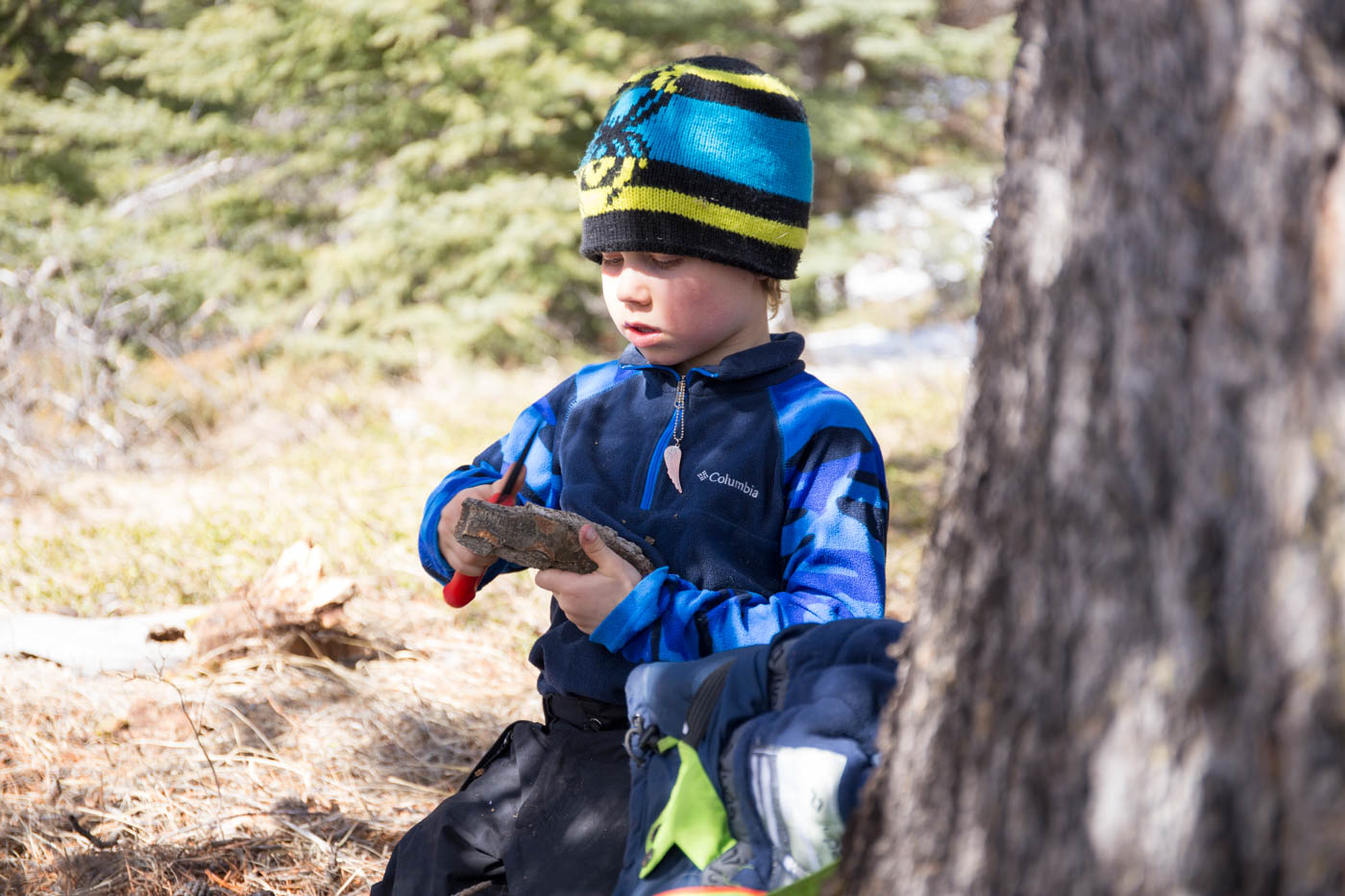 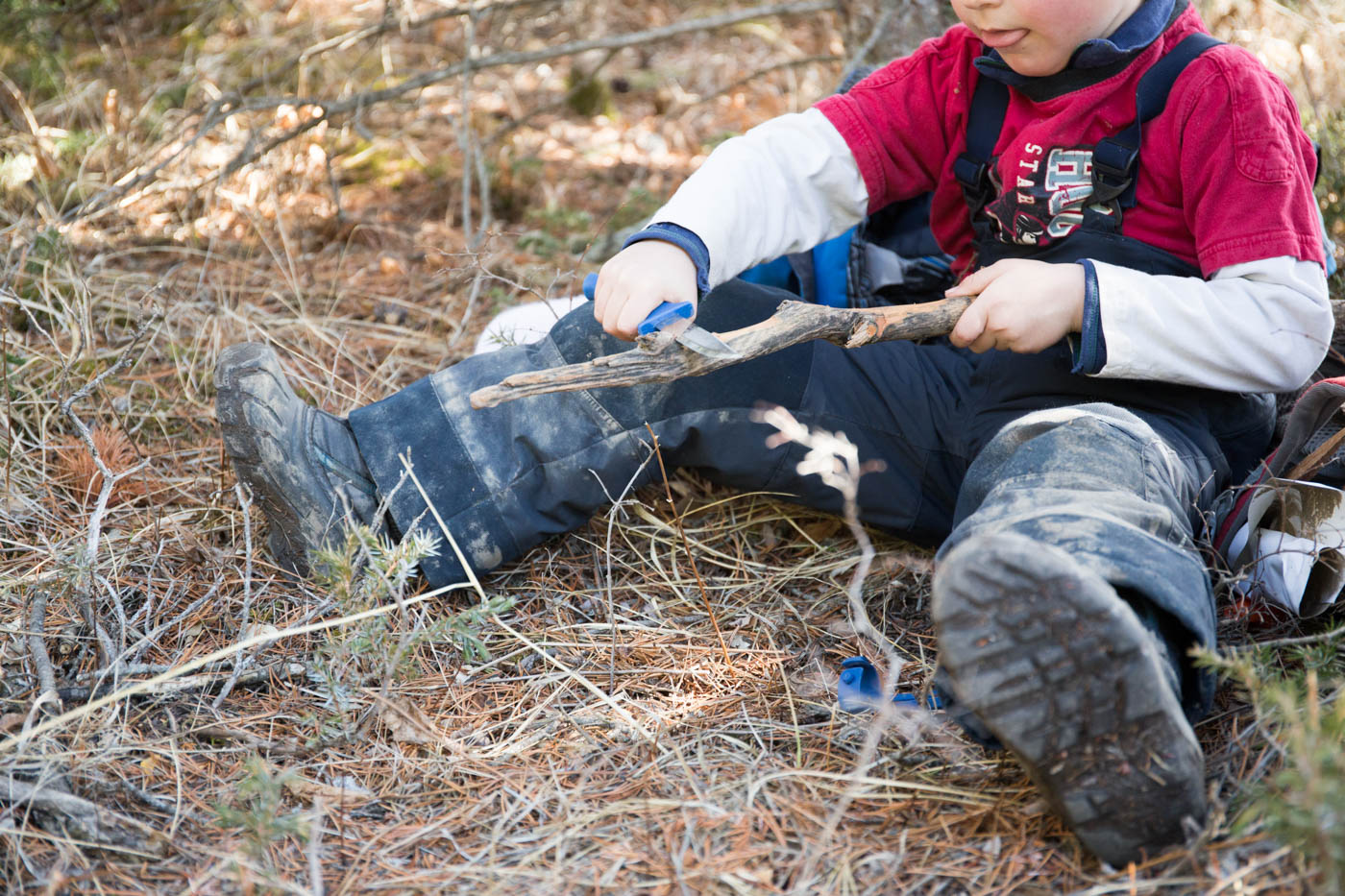 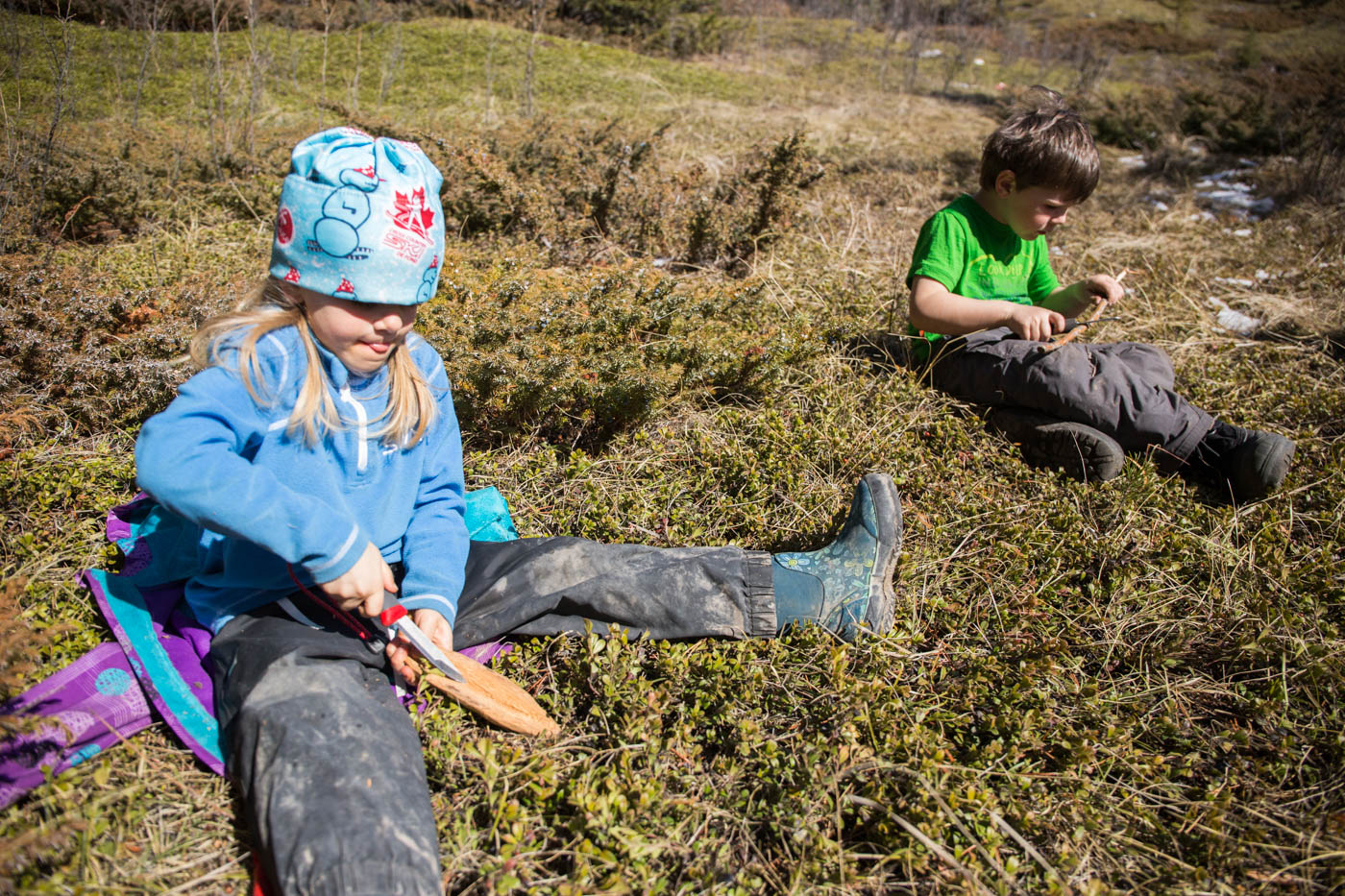 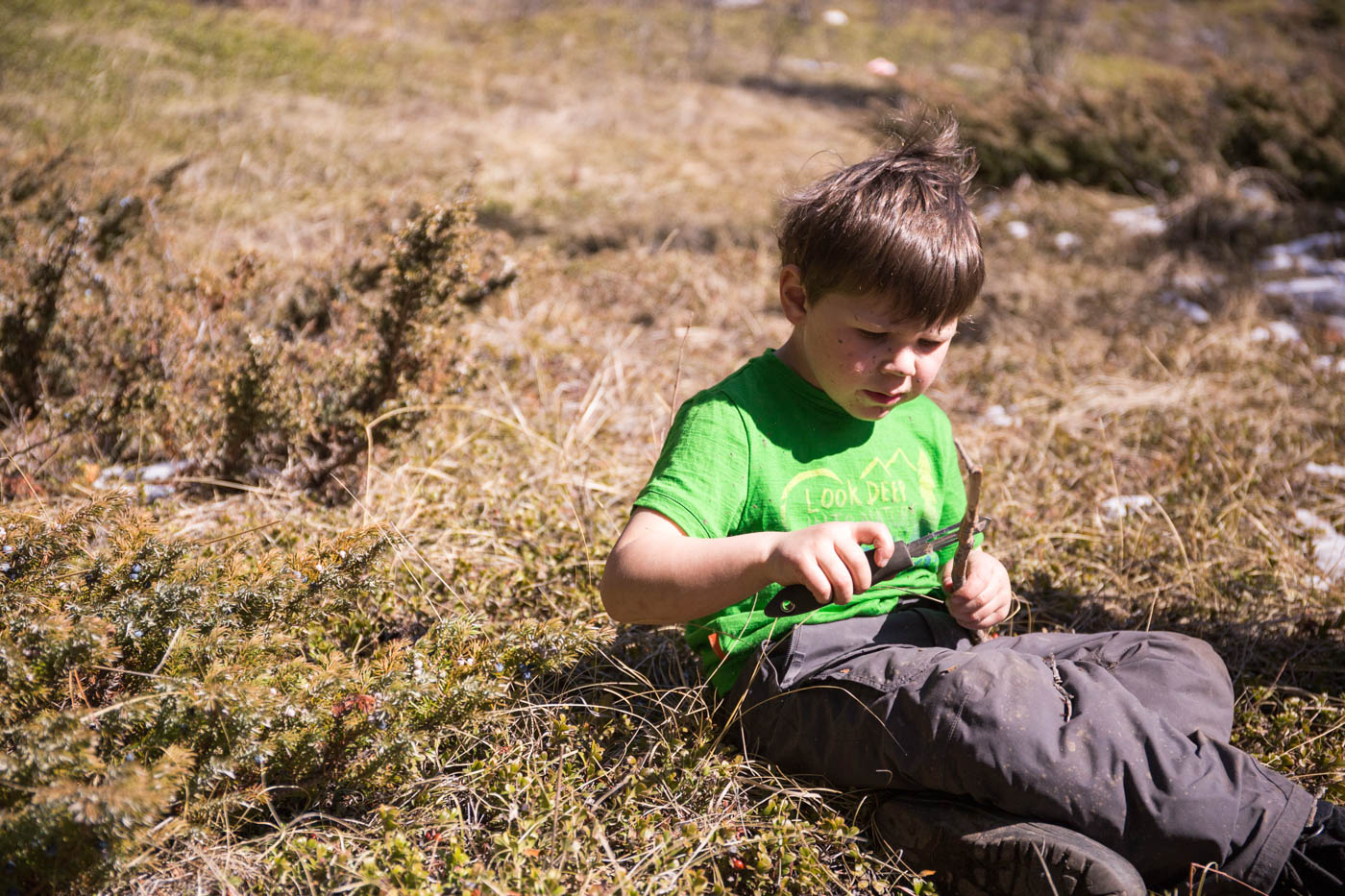 After observing the remarkable carving skills for sometime we were taken away by two boys to play hide and seek past a fallen tree and in an open area of the forest. While we were playing I was stopped by one who told me to try this berry. He explained to me that “you need to pick the blue ones, not the white ones they have too many seeds in them”. I questioned what they were and if it was safe to eat them and he told me they were Juniper berries and you need to suck on them until they were gone. I could see Dave in the background, proud to see him explaining with confidence some of the forest foods available to us. Actually, earlier in the day another child told me about the pine needles and that if you are in the forest with no water and you need it, you can chew the pine needles and they have water inside them. Remarkable stuff. 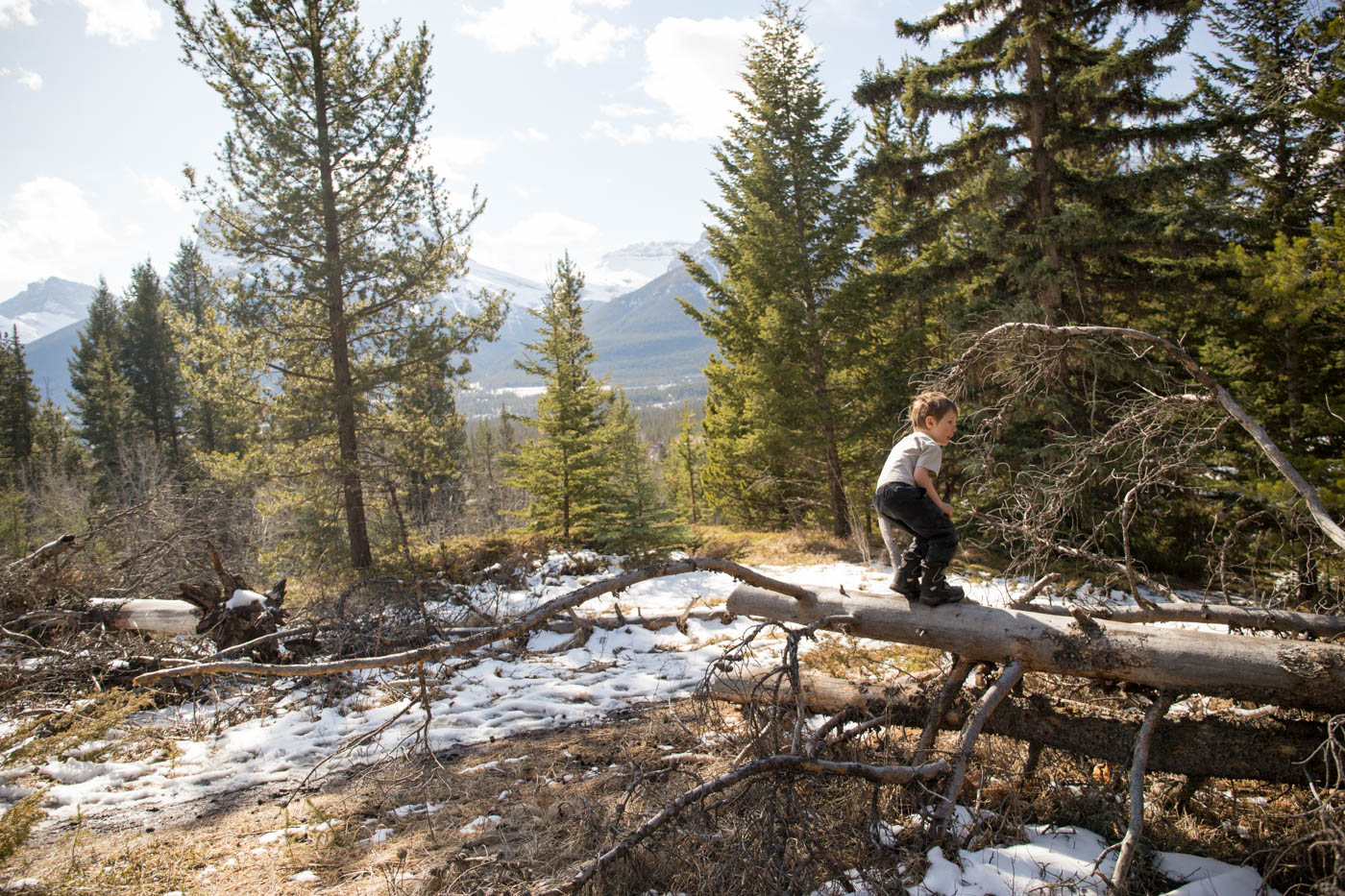 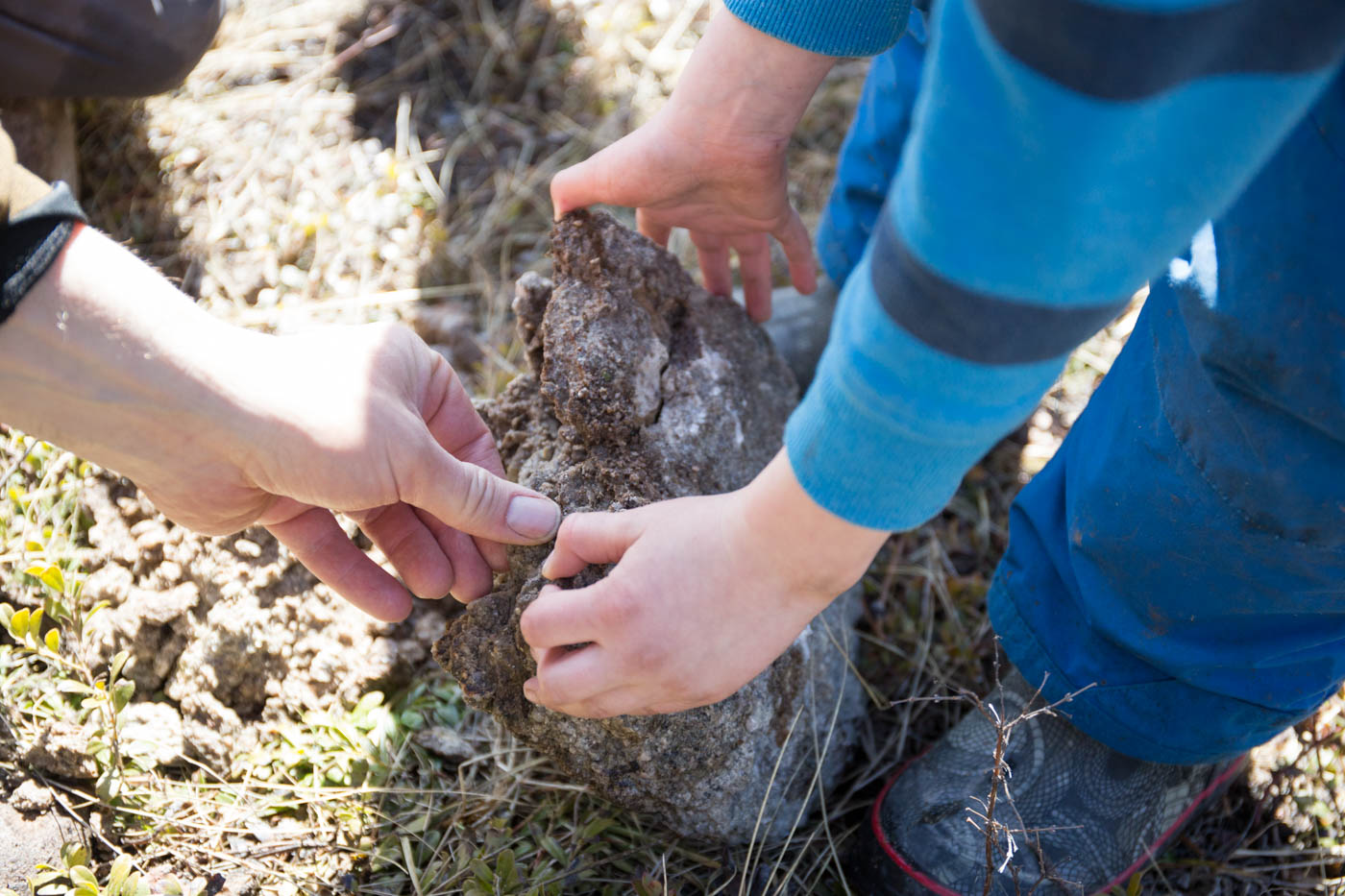 We explored this space for hours with the children before our day came to an end, with requests from the children to stay and play more because 4 hours had only felt like 13 minutes..

An experience like no other, and one I look forward to sharing back home next year. 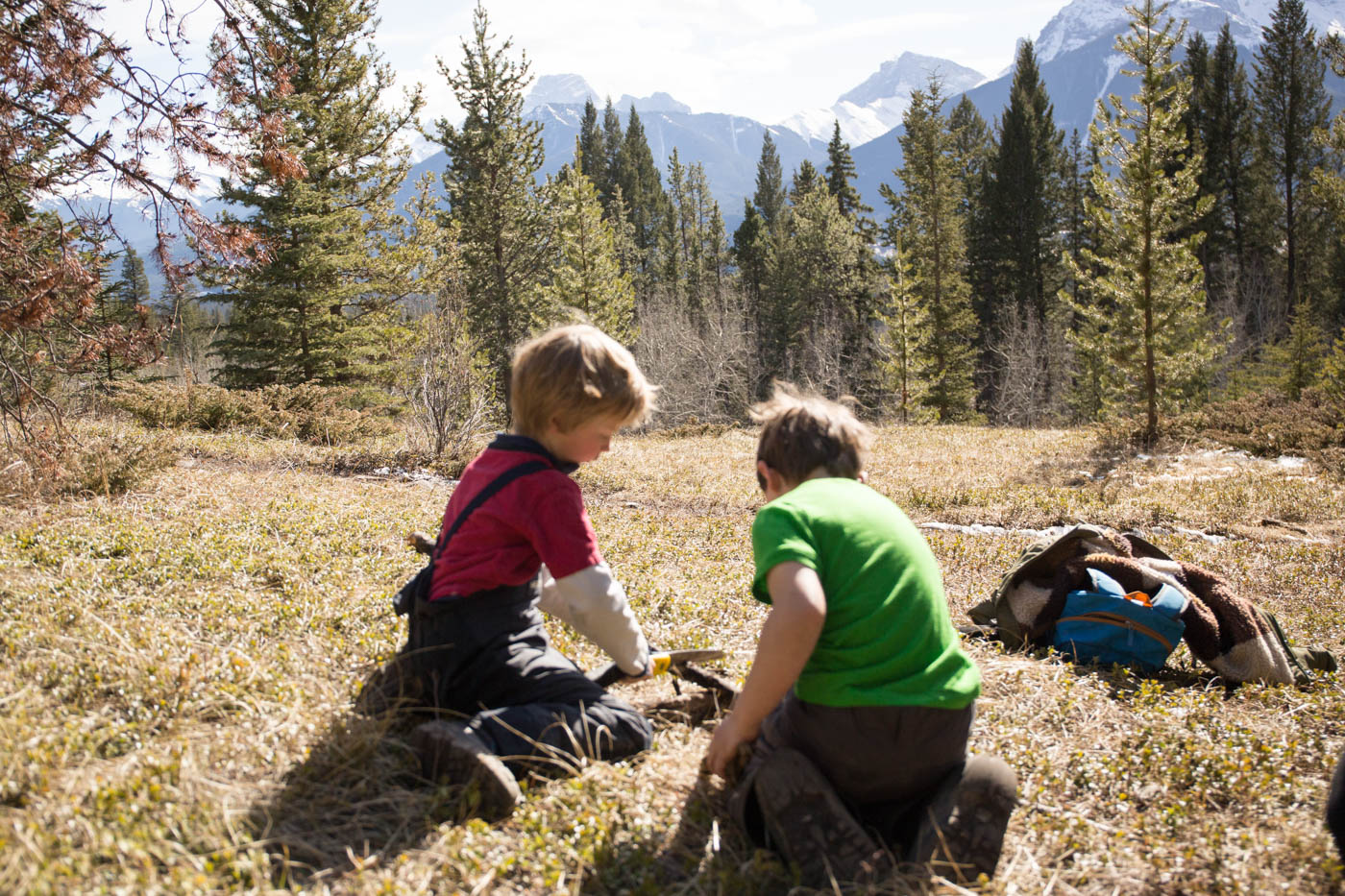