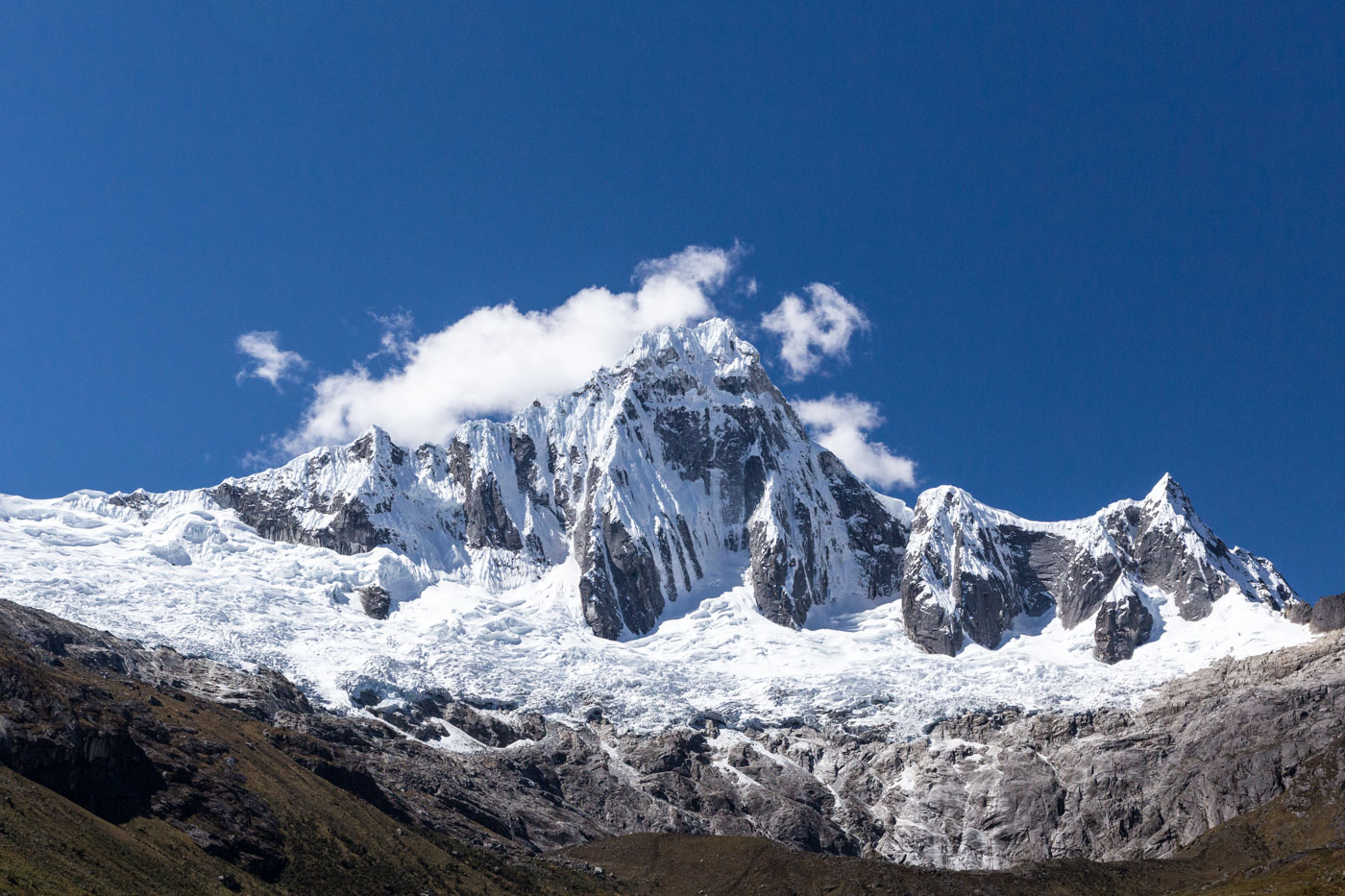 Only 8 days had past since our memorable adventure in El Cocuy and already we were missing the mountains (surprising really after the ordeal we went through). So after a few days of eating incredible food (photo blog of FOOD coming up shortly!) and refuelling in Lima we headed back to the mountains, this time in Peru’s famous Cordillera Blanca mountains.

Situated inland from the coast is the city Huaraz, a base for organising many different types of outdoor activities in and around the mountains. We arrived in the evening with all our clothes, food and maps ready to head off first thing the next morning to begin the Alpamayo circuit trek. This is a trek that includes 75% of the Santa Cruz trek, and then proceeds off in a different direction to loop back around the valley on the other side of the Alpamayo peak.

The planned trek around Alpamayo had us walking 8-10 days at altitudes between 3000-4900m. 9-10 days worth of food meant our bags were really heavy, weighing in at around 17-20kg each. A lot to be hauling up and over pretty big mountain passes.

By day 3 we were considerably tired of lugging around such large bags and after climbing our first mountain pass we both agreed without question to spontaneously change our route and only do the Santa Cruz trek which was 4 days and 3 nights, giving us time that we wouldn’t have had to enjoy some of the other activities Huaraz had on offer. This also meant we could eat whatever we wanted on our final days, happily choosing the most delicious things we packed to eat.

Reasonably early on day 1 we set off toward the trailhead in Cashapampa. We arrived at about midday after catching 2 taxi’s and one minibus from Huaraz totalling around 4 hours of travel along bumpy and unsealed roads ready to start walking with the full force of the hot sun beaming directly down on us.

4 hours of walking with a gradual incline with the sun and heaving bags was enough for us to call it a day, settling on a camp spot right next to the river for the night. A few cows around on the trail, but none in the campsite itself or in the river.

We planned on getting up early as we had around 15km of walking to cover and wanted to get most of it out of the way before the sun hit us hard. Well, that was the intention and ended up waking up at around 6:30am. After realising our plan to leave early had failed we decided to just take our time, enjoying one of the best trekking breakfast’s of mashed potato with bacon bits.. truly so good, you must try it! Oats just don’t cut it for us anymore.

Packing up on dry ground without the numbing cold biting down on us meant we were quite efficient and got going an hour after waking up. Our day started by walking quite casually further up the valley towards the snow covered peaks. Along the way we passed several trekking groups with their mules carrying all of the food and equipment, leaving them happily walking along with a small day pack. You could defiantly see them inquisitively looking at us carrying such large bags and wondering what we were doing or where we were going.

Shortly before lunch at the lake, in one of the passing trekking groups we bumped into Gabriel, a German guy we’d been diving with in Utila, nearly 2 months ago (small world!). We also passed groups heading off to climb Alpamayo with all their mountaineering gear- now that was impressive, it made our bags look small and light.

It was nice being able to take the time to stop and enjoy the incredibly awe-inspiring surroundings on this trek (unlike at El Cocuy thanks to the weather), taking as many breaks as we wished, the most impressive of the day being our lunch spot. Sitting by a beautiful aqua blue lake eating chocolate, candy & a little fruit (balance people, balance!).

We actually arrived at our camp spot for the night a couple of hours ahead of schedule (lucky we didn’t wake up any earlier!) and questioned making our first pass that afternoon, opting for an afternoon of reading in the sunshine after seeing how beautiful the camp site really was. It was the most spectacular valley surrounded on all sides by snow capped mountains. The valley itself was full of cows and mules freely wandering around, eager to find any bits of left behind food. Simon even managed to get sunburnt on the tops of his hands from reading.

As we were still planning to do the Alpamayo trek at this point we were doing our best to try and conserve our gas to last us the 10 days. This meant heating food until it was just warm enough to eat and pre-soaking as much food as possible to reduce cooking time. The other way was sending Jacqui the blonde gringa off to ‘borrow’ hot water from the guided trekking companies with their 20 mules to carry the kitchen tent & equipment.

The chefs were so generous from the other groups that they were more than happy to give us hot water and coca tea for the altitude. On the morning of the third day when going to borrow more water, Jacqui came back to our tent with the chef carrying two of the fluffiest pancakes we’ve ever eaten for us! Pancakes for us was a true delight and shows how kind and generous people can be. Made the porridge we attempted to eat taste horrible, so settled on a pancake and a sachet of ‘baby fruit’ before beginning the climb up Punta Union pass.

After making our way up through the never ending switchbacks to the Punta Union pass, we were pretty tired and after seeing the first glimpses of the second pass we had planned on, it looked extremely steep from Punta Union and the path to cross wasn’t visible. As we started descending, we were soaking up the endless sunshine and really enjoying the weather when I’m not sure what we were talking about but we both stopped at the same time said and said, do we really want to do this for another 7 days? The answer being no, and the decision was to spend more time rock climbing.

We were in Huaraz for 12 days and 10 of those were devoted to just trekking. With our bags so heavy I think we’d underestimated our tolerance for the weight of 10 days food over so many mountain passes. So with this decision made, we continued on along the Santa Cruz trail but this now cut our trek down to 4 days so we were already nearly done.

We walked for a total of around 8 hours on this day, leaving only 5km the following day - a cruisey finish to a beautiful trek.

We casually woke up around 7am and wandered the 5kms out of the National Park where we waited alongside some friendly mules for the long ride back to Huaraz.

The Santa Cruz trek proved to be one of the most beautiful spots we had seen, with extremely magnificent 360 degree views, perfect weather and great company, as always.